Updated 8/13/2011
11:23 PM
UPDATE 7: 8/13/11
The southern route of the Northwest Passage is wide open. The first image is a close-up showing the blue open water; the second, due to the clouds, is an infrared image showing the entire NWP. The parry Channel is clearing out enough to be called unambiguously open, too, but given the clods, we'll wait a bit. It has become very navigable, so far as I can tell.

UPDATE 8/13: The image below is roughly outlined by the yellow box above and shows the southern route almost completely clear of ice. 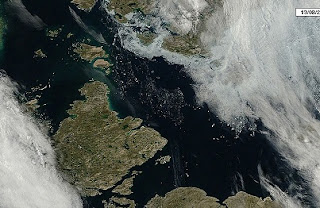 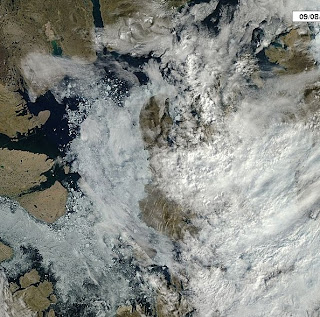 The southern route is just gettin' more opener. This image is from 8/7/11. 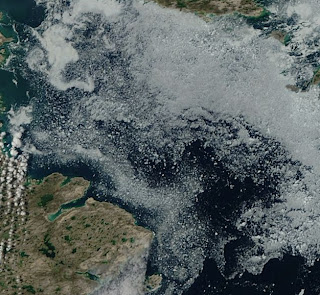 UPDATE 4 7/31/11
I'm learning to love the MODIS images as I figure out how to navigate the website. This is a blow-up of a 250m/pixel image from MODIS. I've added a scale estimated using Google Earth for perspective on how much open water there is. The caution is that there is also ice that doesn't show up at this resolution, so interpret as you will. 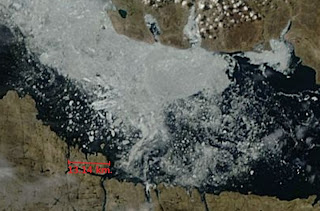 
I'll be very surprised if both passages are not open by the end of the month, and see a 50/50 chance they will be open in the next two weeks. At minimum, all the ice should be broken up, even if not flushed out, and may be navigable.

With two days to go, I call the Northwest Passage open via one of the southern route variations. The ice in the southern route in the images below is not solid and the resolution on the images is not a lot better than about 1 mile. Certainly, any Arctic-going vessels could make the trip, or with an ice breaker leading the way. I consider it fair to call it open if a ship designed for the area seems likely to pass through. We looked at the southern route before: 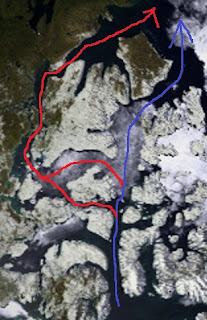 The sea ice in the more westerly route is looking like, as I have come to think of it because of the opaque floes with apparently quite thin ice between, as cottage cheese. The thin ice, if my hypothesis is correct, becomes apparent when the pack ice begins to break up. As we can see, there is no solid pack ice remaining along the channel notated below:
UPDATE 2 7/29: This is the image for the 29th. No major important changes other than the large pack in the has broken up. Looks a little more passable. 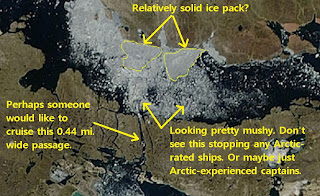 UPDATE 1 7/29: This blow-up of the area marked with the blue line above shows there is some cloudiness obscuring the image. The ice area/coverage is probably no greater than in the areas marked with red lines. 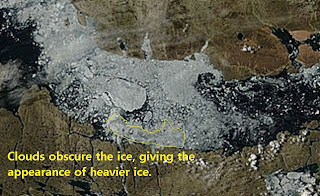 The capture below from The Cryosphere Today for July 28th is based on a minimum 15% ice; less than 15% is shown as clear. While I regard the images above to be more accurate because they are direct images, this image helps clarify the actual extent/area of the ice given the relatively low resolution of the images above which makes smaller ice floes indistinct. (Also note the ice in the main channel seems to be clearing and thinning under the cloud cover.) 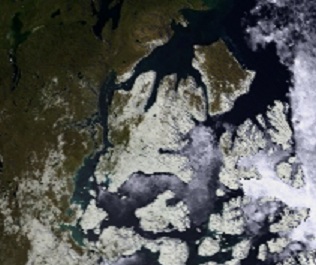 Analysis: There is a lot of cloudiness and many cyclonic patterns in the Arctic area of late, I assume at least partially connected to the mildly positive Arctic oscillation. While clouds are said to keep the sun off the ice, thus should reduce melt, the air temperature under a cloudy area often is warmer than a non-cloudy area. While direct sunlight warms surfaces, the air temperature is often colder without cloud cover. If this is accurate, then the combination of warmer air coupled with studies that suggest 2/3 of sea ice melt is due to ocean temperatures, perhaps the cloudiness balances the lack of sunlight.
Cloudiness and cyclonic patterns indicate a certain amount of wind and storminess. I have contended, based on the direct observations reported from ships in the Arctic and from the "cottage cheese" look of the ice as each area begins to disintegrate, that much of the ice in the arctic is much less homogenous than in previous years, particularly pre-2005. I suggest there is a lot of older ice cemented together by very thin 1st year ice, all of which is much more susceptible to melting than pre-2005 ice, especially once it begins to break up.
Perhaps more importantly, a recent article about an upcoming paper noted that the large amount of melting first year ice, being denser, is possibly creating a cold layer of water about 200 ft. below the ice and pushing warmer, less saline water up under the ice, enhancing the rate of melt.
Here's the full southern route on the 27th for reference. The rest of the passage is definitely open.

Feel free to quibble, but bear in mind a ship already made the Northeast Passage with assistance a couple weeks ago, well before I called it open. If they can ship through it, it's open, no? If you do choose to quibble with my analysis, then 1. eat my grits! and 2. don't get too cocky because it will likely be unambiguous soon. And there are still two days before I'll have to eat crow for what I said on the 5th.
Posted by ccpo at 7/31/2011 08:27:00 PM