Current State of the Arctic Sea Ice - A Layman's Analysis

We have to look at the other end of the passage, also. The first image below is the eastern end of the NWP on 6/30. The ice had been stable in that general area for weeks. There are several islands in the channel at this point, and it is where the channel opens up from the narrower passage between here and the open sea further east. I believe the islands played a role in keeping this ice locked in place, but once the ice disintegrates beyond the islands the pace may increase. Note the areas of grayish ice. Those are areas where the ice has already begun to break free and where future breakup can be expected.

Here we can see the breakup beginning with the little peninsula and some ice to the left of the channel breaking up. Again, note the gray areas.
Here we see significant cracks forming left and further up the channel in preparation for disintegration.
And here we now see cracks all across the channel roughly along a line drawn from the corner of the island on the right and upward and over to the islands on the left. I think we can expect significant break up over the next week or two. Perhaps the interplay of the breakups at both ends of the channel will accelerate both.
UPDATE: The area is showing signs of rapid breakdown just a day later: The following two images show the full length of the channel. (NOTE: the channel is only part of the NWP.)


As stated earlier, I consider the NW and NE Passages to be proxies for the Arctic Sea Ice overall. One reason for this is that the oldest sea ice is supposed to be along the Canadian Archipelago in the Arctic Ocean, yet, this passage is opening every year. I'd think the narrow passages would encourage retention of sea ice since it should be difficult for it to flush out. Perhaps this assumption is wrong and the channel acts to accelerate water flow through it. Also, once the ice melted out several years ago, most of the old ice would be gone from the channel with little or no old ice floating around to help refill the channel leaving it vulnerable in subsequent years.
UPDATE: The Northeast Passage ice is showing rapid mass and extent loss, as is much of the Arctic Sea Ice the last couple days. Here's an image from July 8th: 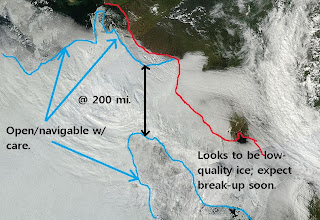 It's looking very much like a race to see whether the NW or NE will open first, but right now it looks like the NEP has a good lead over the NWP.

EDIT: Looks like the supposition of old ice being flushed out was correct:
Perhaps the heat retained by the islands or water flowing off of them plays a role, too. Whatever the case, since it first opened up, it has continued to open each year and I see no reason why it would not continue to do so.
Consistent with this, we have seen new lows in ice volume nearly every year, and 2007 - 2010 have been the four or five lowest years on record for volume and extent since tracking began with satellites in the late '70's. With the continued thinning year after year, the huge loss of old, thick ice, the late freeze last fall/winter, the record ice extent lows over the entire cold season and up to today, and the nearly open NW and NE Passages now, I have a very hard time not seeing a new record low for both extent and volume.

Here is a view of the entire Arctic Ocean, with annotations.
I'll be very surprised if both passages are not open by the end of the month, and see a 50/50 chance they will be open in the next two weeks. At minimum, all the ice should be broken up, even if not flushed out, and may be navigable. (The resolution on these images doesn't give a clear idea of space between ice floes/icebergs.)
UPDATE:  The ice bound up along the Alaskan/Canadian coast has moved offshore, opening the passage. This leaves, at least for the moment, only the ice in the Canadian Archipelago between an open and closed Northwest Passage.

The images above were taken from here. It is an interactive image you navigate like Google Earth. you can zoom in and out and drag the image around. You can also double-click anywhere to zoom and center the image at the same time. These images have the highest resolution I have found. Learning to tell clouds from ice takes a little attention in the beginning. Because it is not radar, you can't see areas covered by clouds. I encourage you to explore the sea ice to see for yourself the desperate condition it is in.
Posted by ccpo at 7/05/2011 09:37:00 AM

The new IEA World Energy Outlook revised **downward** to 105 million barrels a day it's projections for future oil production. What they are saying is, over the next 20 years, we won't be finding much oil. Whistle blowers, one still employed, one not, say even this is wishful thinking. We agree. We have thought so for two or three years. They also say the decline rate is higher than admitted - and it was already 4.2%!!! This means we are looking at, what? Six percent? Eight? At six percent we lose the equivalent of Saudi Arabia every two years. Of course, we aren't finding that much new, recoverable oil each year and haven't for decades. Where's the extra coming from?


* Production surpasses new oil discoveries by a margin of 3 :1 or 4:1. This is unsustainable.