Arctic Sea Ice Extent
This has been an unusual melt season in terms of extent. The area and the volume are tracking at record or near-record levels, yet the ice is very spread out. Obviously this indicates the ice is quite thin relative to historic, or even recent, conditions. Why is it so spread out?
A brief Dipole Anomaly (2007 conditions) with a high set up in the area of Alaska then dissipated. Had this persisted we should have seen more ice transported out of the Fram Strait and the ice pack compact under a consistent wind regime toward From the Bering Strai/Sea region toward the Fram Strait.

As it stands, my prediction for Extent, just slightly more than for 2007, seems to have been low, and I can't remember why since I wasn't expecting a new record. There is an indication of another Dipole Anomaly setting up which potentially could accelerate movement of ice and ice loss via wind direction and higher temperatures. If a strong Dipole does develop, a new record is well within the range of the possible. The strong caveat comes from how spread out the ice is at this time.

Another consideration is the Arctic Oscillation (AO) which is generally predicted to begin moving toward neutral and possibly go positive by September. A positive AO is associated with cooler temperatures in the Arctic indicating slower, less or no melt is possible.Still, given there are as many as three more weeks of melt season left, we could see a new extent record.

Judge for yourself the state of the ice (Images taken from here.): 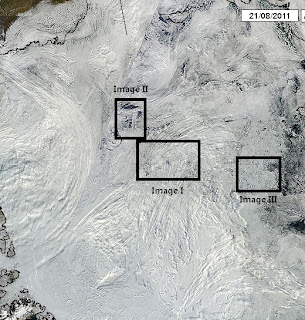 Arctic Sea Ice Area
This is a little more of a statistical analysis. I have looked at current conditions and the past two years and extrapolated. The black bars are the difference in area for this approximate date this season and the prior two compared to the long term mean. The red lines the difference in means for each year at the minimum for each year. As you can see, the anomaly difference can be slight as in 2009 or fairly large for 2010. The blue and green lines on the graph show what the ice area minimum will be if the anomaly right now remains the same, relatively, at the time of the minimum and what it will be if it is somewhere between '09 and '10.

The melt season, like pretty much all natural phenomena, is not linear. Over the past weeks this has been amply illustrated. We've seen Arctic Sea Ice Area decline slow, speed up and even seen the area increase. This pattern is probably more likely as the season comes to an end and the Arctic cools over all. Cooler days may see ice growth while warmer days will see it decline. The ice season also has no clear rhyme or reason; it could end in ten, twenty or thirty days.We are still looking likely to see a new record for ASI Area. This measurement tries to determine the actual area of ice, not ice and open water between floes as extent does, so it is a little less dependent on winds and currents for short term changes, though obviously weather and temperatures do drive changes.

I won't be surprised if we hit the low end of my error bar (2.83m km2) if conditions favor melt. As with extent, whether the Dipole Anomaly develops or the AO goes positive will make a difference, and potentially a large difference. 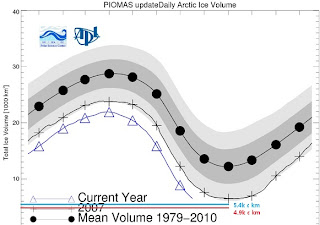 I have tried to mark estimate volume if melt slows (blue line, 5.4 cu. km) or continues the current trend (4.9 cu. km.) Again, it looks like my estimate may have been high, though within my range of error. The areas of low ice extent around the fringes of the main pack ice will be the key here. If we lose most of that and are left with a core of thicker ice as in 2007 we might hit a new volume record, but 2010 volume was extremely low at @4.5 cu. km.

Volume is the most important estimate, in my opinion, because it reflects all the forces affecting the Arctic Sea Ice: irradiance, air temperatures, sea temperatures, weather. It gives an excellent sense of the condition of the ice when there is divergence between extent and volume, for example, because you know the ice must be thinner if extent is higher than the record, yet volume is lower.

Northwest Passage
The Northwest Passage is filled with much at this point. Those white specks are the ice floes under the clod cover. The scale here is about 20 km./inch, so there is plenty of room to maneuver, though ice obviously should be treated with great caution. 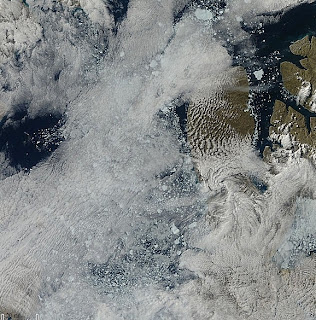 This image is from the 16th. You can see much of the really small mushy ice has melted away. 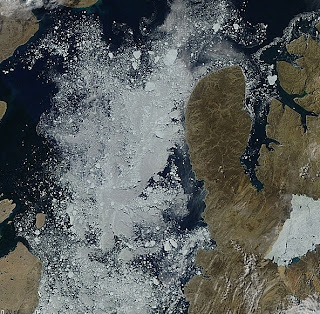 I'm not expecting the Parry Channel to clear completely, but it is clearly navigable. The southern route would be safer, but is longer by a good 300 miles.

Northeast Passage
This image from the 16th shows the ice more clearly. The ice has thinned considerably compared to the above image. 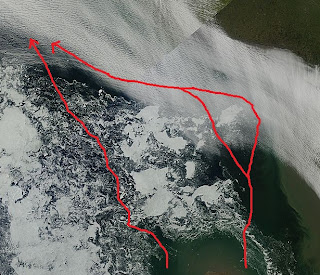 The key point here is that the both the Northwest and Northeast Passages are opening every year, and earlier each year. This illustrates the effect of thin sea ice. It takes very little energy and bad weather for the ice at the outer reaches of the Arctic to melt out. This year it was extremely early. The Northeast Passage was officially open for ice breaker-guided shipping on June 30th, and open, by my estimate, for traffic soon after that.