Sea Ice Extent
The final 2007 minimum extent compared to the present make it seem doubtful a new extent record will be reached unless we have unusual heat and ideal weather for melt over the next two weeks. From Cryosphere Today:

If melt continues down to where we see more compacted ice in the images above, a rough estimate of the areas of compact ice in the '11 images correspond well to the '07 extent, so we'll be looking at a near-record or new record, if so.

and expected to be mildly positive or mildly negative till the middle of the month which should help reduce ice loss. Current sea ice drift patterns seem to encourage ice loss and a possible reduction in extent. The large area of loose ice looks to be moving toward the center of the pack; given how loose it is, it could reduce to 1/4 its current area by rough estimate. The yellow box indicates an area of very little ice, also, appearing to be a place where sea ice goes to die this season. There also is a flow from both of Greenland toward the Fram Strait which would indicate significant transport out of the Arctic Ocean. These patterns can change quickly and may only be significant if they persist. 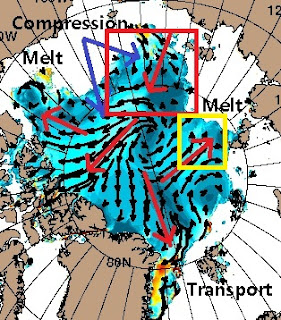 Air temps where the ice pack is sitting are hovering around 0C. Since sea ice is slightly colder than freezing, there is probably still a net melting effect from air temps. Sea surface temperatures look to be about ice temperature, but warm around the ice. I suspect also under it yet since the water around the ice pack is reading warmer than the ice, but in the area of the pack is reading about ice temp. Sounds like a sampling problem? Sea Ice Area
This measure is more important than extent for assessing current state of the ice, but is more difficult to measure. Current analyses put ice area at or near the '07 record. The melt season could another 2 - 2.5 weeks. Even with favorable-to-neutral conditions for low melt rates, a new record here is almost a guarantee.

According to Cryosphere Today, ice area is already below 3 m sq km.

Ice area measures the total surface area of the ice excluding areas of water between floes. Given much of the ice around the edges of the main pack is very thinly distributed, and the ice is very thin, we should see enough melt to set a new record. less than 10k sq km /day will take area below 2.9m sq. km.

Sea Ice Volume
Sea ice volume is further from a record than area and extent are... 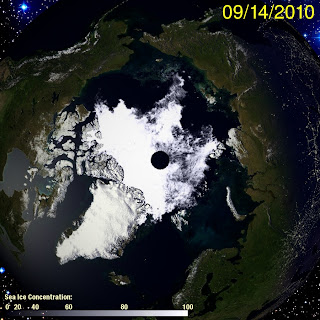 PIOMAS does show ice volume already tracking below the '07 minimum. 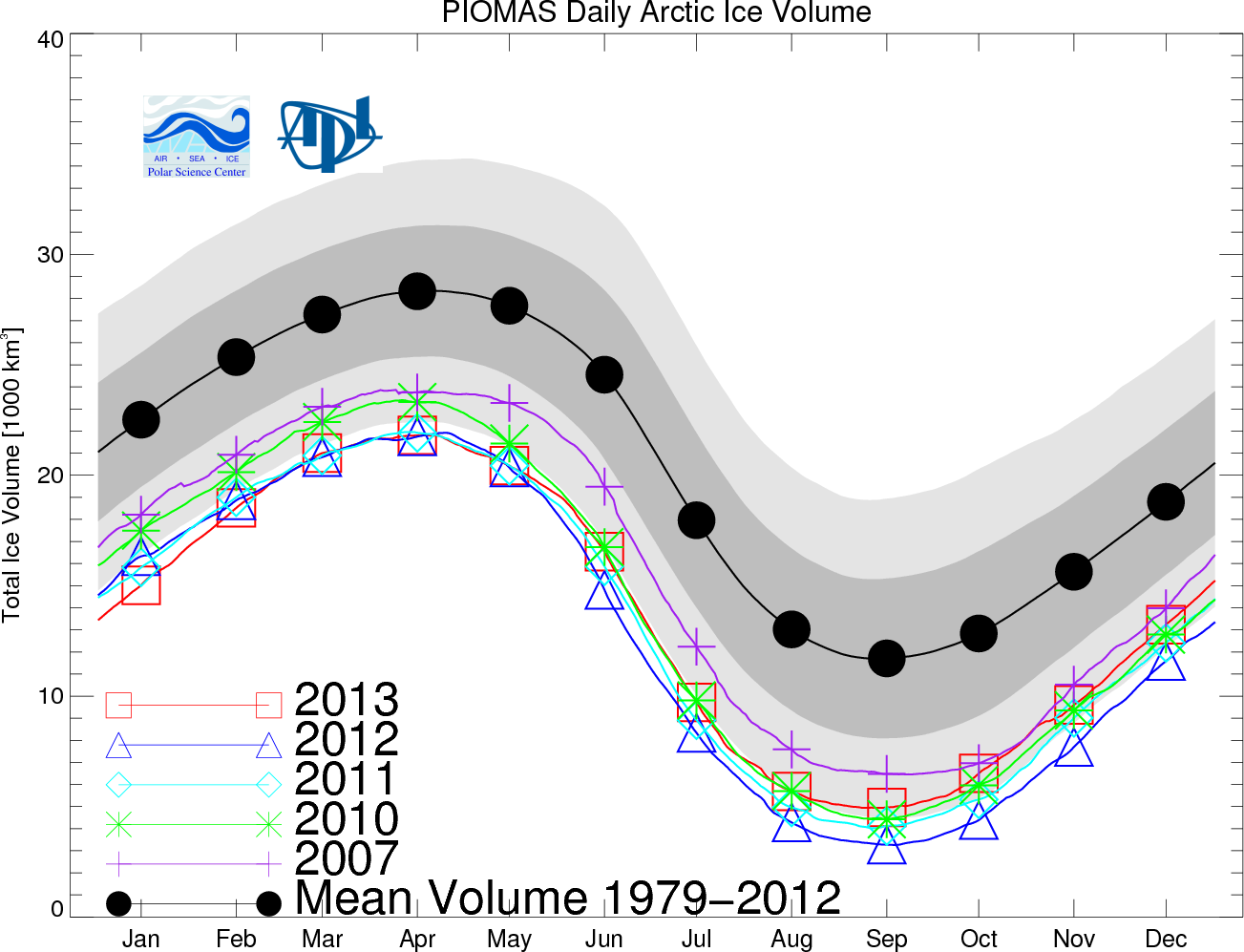 The PIOMAS models should at least comparable to themselves year-to-year, but there are doubts about the new model as illustrated from comments at RealClimate's thread on Arctic Sea Ice.


I have reservations about the volume numbers and ice thickness models. The piomas version 2 model that was introduced this spring shows considerably higher thickness values. The navy, for example (http://www7320.nrlssc.navy.mil/hycomARC/navo/arcticictnnowcast.gif) reports two to three meter thick ice all around the north pole. Russian and American science vessels recently met at the pole and reported actual thickness of a meter or less.

Neven has info on a report from the Polar Stern as it reached the North Pole.

A recent post from the polar Stern (in German) speaks of the condition of the ice as being very poor.  They are having a very hard time finding ice thick and intact enough to do their research activities.

The graph below from that post illustrates the thinness of the ice. Of course, anyone who has seen footage of Arctic ice, particularly from below, knows it is anything but one large flat ice floe. The ice gets squished together and stacks up in piles and ridges. What is interesting is that old footage used to show large blocks of multi-meter ice that was contiguous. Now images and film I see only shows jumbled up ice, as if the only thick ice exists because of ice motion and not freezing. The spikiness in this graph encourages me to consider this as a serious possibility.

Also, that spikiness is reflected in the images we see of the "cottage cheese" pattern of ice I have discussed earlier in which individual floes are surrounded by what can only be thinner ice. 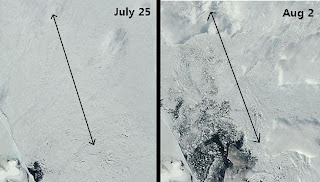 Unfortunately, the MODIS images have been too cloudy to get a good look at the ice for a while. This radar image gives a fair sense of the ice and with more detail and accuracy than the Cryosphere Today images.


In fairness to PIOMAS, new models take time to calibrate and refine. If the changes they made this year are an improvement, I still think it is certain they are overestimating ice volume for now. Still, lower than 2010? Perhaps not. We didn't have a strong melt this summer.

It's a mixed bag. A probable new record in Ice Area, a slightly possible new record in Ice Extent and a new 2nd lowest Ice Volume. I do think the volume numbers are not  highly reliable and the first-had reports do indicate a likely new Ice Volume record, but that would also mean the numbers for 2010 volume were too low or that 2011 numbers are far too high. We may have to wait a year or two to find out.
Posted by ccpo at 9/03/2011 11:13:00 PM