Updated 7/28
Northeast Passage Open
It had looked through the clouds as if the ice might be encroaching on the shoreline, but the passage looks as open as ever. 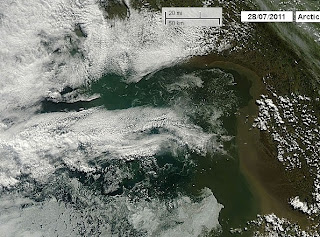 After about a week of being open, but not strictly clear and open water with virtually no ice, but passable, the Northeast Passage is unequivocally open. The last area of coastal sea ice along the Russian coastline has cleared out but for a few wisps of ice, likely due to storms over the area the last couple of days. You can see the two previous threads and images here and here and the source of the image above here.


I was somewhat expecting it to clog up with ice since wind/drift patterns were, according to several sites, blowing toward the coast in the area we've been watching, but instead we have very open water. The ice was very lightly packed in, so it may have melted out. Cloud cover does reduce insolation, but clouds also typically hold heat closer to the surface. I'm assuming this would be true in the Arctic, as well. Regardless, the ice is gone and we have the earliest opening of the Northeast Passage that I am aware of, certainly since the signal of Climate Change kicked in back in 1850 or so.

Why Early Opening Matters
Climate is a non-linear system. Depending on whom you ask, it is, more so, a chaotic system. Both types of systems have the characteristic of large, sudden changes based on small changes in initial conditions. The Arctic Sea ice has been said to be in a Death Spiral by Dr. Serreze, meaning feedback loops and warming have advanced so far they cannot be stopped before the Arctic is ice-free for at least part of the year in the future. Another scientist has posited the Arctic sea ice will be gone in somewhere by 2016 +/- 3 years. That is, Arctic sea ice might be gone in the summer within two years.

Scientists studying Climate Change concluded long ago the poles Arctic and Antarctic would warm faster than the rest of the planet, particularly the Arctic. The Antarctic, because it is a landmass, not an ocean, that is also topped by miles of ice and because of the ozone hole, has circumpolar winds that are quite consistent and keep the continent fairly well isolated from the weather patterns of the rest of the globe. The Arctic, however, is an ocean so there is no high land mass, no towering ice sheet and no ozone hole to keep it isolated by influencing the circumpolar winds. It has circumpolar winds, but they interact much more with the rest of the planet's weather systems.

In fact, the Arctic Oscillation (AO) is, to put it over-simply, is a matter of overall high- vs. low-pressure in the Arctic. When the AO is positive, the winds of the Arctic keep it somewhat isolated like the Antarctic winds. in its negative phase, however, cold air is pushed out of the Arctic and warm air flows in. The Arctic is then warmer than usual and the mid- and high-latitudes are colder than usual. This phenomenon is what gave us our heavy snow and cold temperatures as far south as the southern U.S. border last winter. But that is very bad for Arctic sea ice because it can effect ice growth.

Last fall the Arctic sea ice froze up very late. The combination of the heavy melts the last four years (2007 - 2010 were the four lowest in the record, with 2007 the lowest of all), the slow freeze, the negative AO and fast spring melt this year, and other factors, contributed to thin new ice this year. Since the Northeast and Northwest passages have been opening since, if memory serves, 2007, there is little or no thick multi-year ice in those areas. Bear in mind the Arctic ice pack is always moving, so old ice could move into those areas, and probably has to some extent, but that is a far cry from heavy ice building up, and re-building each season. We now have thin ice over much of the Arctic.

This early opening is meaningful because it is an indication of a potentially large step change in the non-linear ice loss process. That is, it could be a signal that a fundamental shift is taking place and may signal an acceleration of ice loss in the Arctic. And, as the Arctic goes, so goes the planet.

The polar regions act much like your air conditioner does. It has a very noticeable cooling effect. A demonstration of this lies in the measurement of a heat pulse - warming - up to a thousand miles inland when there is rapid ice loss in the Arctic. That helps the permafrost melt faster, which releases more CO2 and methane (CH4) which  causes more warming which... You get the idea. We've already spoken of the AO and how it affects the weather where we are. The most frightening aspect of the Arctic melting so rapidly is that the CH4 on the sea floor in the Arctic is already showing signs of destabilizing. Measurements have found columns of CH4 bubbles rising to the surface along the Siberian coast, if this process is accelerating - and it seems virtually all warming measurements are - it means the potential for future warming is much greater than previously believed. Some fear a massive release could start significantly raising temperatures in the time scale of decades rather than centuries. If so, we'd have virtually no hope of stopping devastating warming short of massive, global mobilization to regrow forests, reduce energy consumption and consumption of all kinds drastically, change to renewable energy and many other changes essentially like we were at war... which we are - with ourselves.

Some people, perhaps most particularly climate scientists will consider this post hyperbole. When considered in terms of risk assessment and future planning, think of it this way: you are watching someone overdose on drugs. You aren't sure they will die and you are not sure how soon, if so, but you know it is a very real possibility. What do you do?