Chopping Down the Cherry Tree - Answers to Climate Change Denial


Chopping Down the Cherry Tree

The image above shows a cherry tree with 96 red cherries and 4 blue cherries.  If somebody asked me or another scientist what type of tree this is I would state:
“It is very likely to be a red cherry tree and I am investigating why there are a few blue cherries that do not appear to fit in.”
Similar statements have been made by scientific experts regarding climate change:
“Most of the observed increase in globally averaged temperatures since the mid-20th century is very likely due to the observed increase in anthropogenic greenhouse gas concentrations.”  (IPCC, 2007)
“Continued greenhouse gas emissions at or above current rates would cause further warming and induce many changes in the global climate system during the 21st century that would very likely be larger than those observed during the 20th century.”  (IPCC, 2007)
The term very likely used by the IPCC means a probability greater than 90%.
A poll performed by Peter Doran and Maggie Kendall Zimmerman at Earth and Environmental Sciences, University of Illinois at Chicago of 3,146 Earth scientists showed 96.2% of climatologists who are active in climate research believe that mean global temperatures have risen compared to pre-1800s levels, and 97.4% believe that human activity is a significant factor in changing mean global temperatures.
For more information about the scientific consensus regarding climate change please see The Scientific Consensus.
So if this red cherry tree is so obvious why do we still have some people trying to tell us that it is a blue cherry tree?  This technique is called cherry picking data to support a false claim.  A few notable examples of cherry picking appear below.
1)  “Global Warming Stopped in 1998” or “There Is Global Cooling”:
If I were determined to show global cooling, I would choose 1998 as a starting point and then 2008 as my ending point.  Why?  1998 was a strong El Niño year which caused a very warm signal and 2008 had a strong La Niña which caused a very cool signal.   Here is what the four major global temperature plots look like when I “cherry pick” the data: 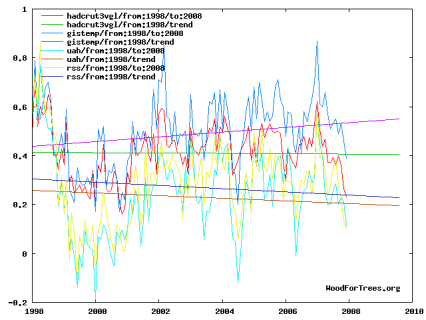 Global surface and lower troposphere monthly mean anomalies and linear trends between 1998 and 2008
Three of the four global average temperatures indeed are decreasing in their trends (although the actual global mean temperatures are still warmer than the previous decades). So what happens if I start with the year 1999 and end with the year 2009? 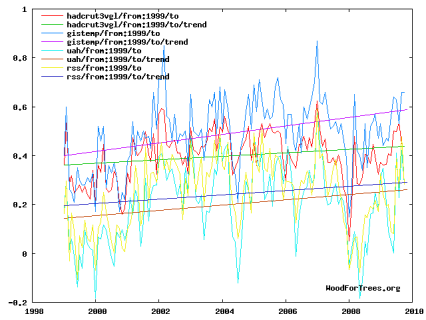 Global surface and lower troposphere monthly mean anomalies and linear trends between 1999 and 2009
Simply by shifting our starting point by one year, all four global average temperatures are increasing in their trends! The point made here is that if one cherry-picks a small subset of the data, one can make just about any claim with a nice plot to back it up. The correct way to view global temperature trends is to look at ALL of the data. 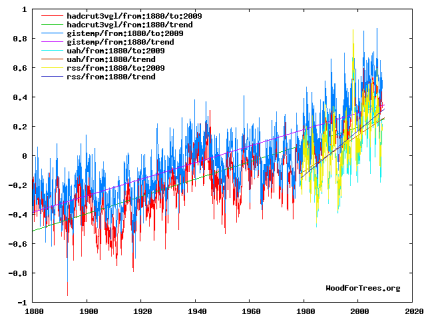 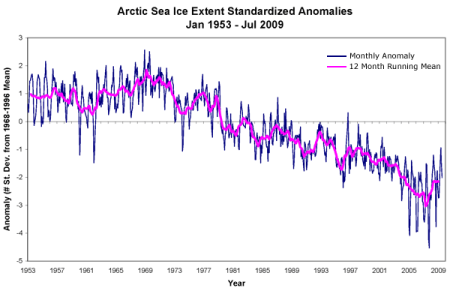 Northern Hemisphere sea ice extent since 1953
The image above from the National Snow and Ice Data Center indeed shows that ice extent has increased from a record low in 2007 but, of course, the long-term trend is steeply downward since the 1970s.
Sea ice extent is just part of the picture. Sea ice thickness has also been measured by declassified submarine records and ICESat satellite measurement.

Looks like a red cherry tree to me!
3)  “Greenland and Antarctica Are Gaining Ice at Their Centers”

Mean cumulative specific mass balance of all reported glaciers (black line) and the reference glaciers (red line)
It is quite obvious that glacial mass is rapidly decreasing.  So what about the claim that some glaciers are advancing?  According to the WGMS, 90% of worldwide glaciers are retreating.